Yet another interesting deck I've got out of the Hans Wesseling-Collection, and this on many accounts what to think about a deck made by an Italian artist with fresh titles on the cards printed in (probably) 1983 in a limited edition by a now no longer exciting publisher in a limited edition with the quaint run of 831, but with on the cards themselves the name of Jollycards of Genova as publisher (or where they just the printers?) .To top all that it is a modern rendition of the Etteilla Tarot in black and white.


This rarity among deck is populated by strange personages, organic shapes and wild dreamlike compositions  forming a true Art Tarot. 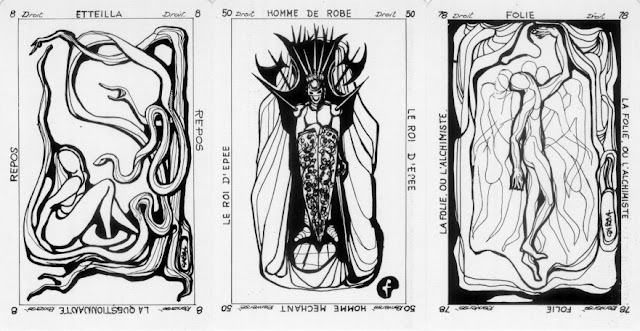 For the third year in a row now some members of the "Tarot Collectors Forum" have created a deck and as different and individual as each member is so, so is each card. Once again, and to the joy  off all who participated, this deck turned out very well. All kinds of techniques where used from photographic over collage, paintings drawing etc..


Besides the unifying  borders and typesetting there was a special element to be incorporated into each creation namely a blue line. Despite some apprehensions of some this was executed in the best possible way without sticking out as a foreign thing.


And as something special the extra card in this deck must be one with the longer names around namely: "The Obsessive Collector & Incidentally Also The Happy Squirrel Card"

Tarot of Frown Strong by Leo

This deep & bizarre deck has earned his followers and fans these last 4 decades, and is still going strong and very much being sought after despite being long OOP, and most important for me has found its way into my collection. It was created by the Swiss esoteric teacher Leo Armin, a healer and guru from the 70's and 80's who had his own group of followers (among who actor Peter Sellers) and also ran a church.
The deck has been printed at (least?) three different times, after some research I’ve reconstructed a printing history
1978: hinged black box edition with green velvet interior (this seems not always to be the case – but I’m not sure of it means there where several print runs or that there where simply different boxes in regard to the interior furnishing). This is the original version that was published by Cobwebs Press (London). It was released to the US in 500 signed copies by U.S Games Inc.
1986: "white box edition 1"
The edition was printed by the “Regal Print Company” (London) and was probably printed in 1986. This edition wasn’t signed and differs from both the original English version and the US Games version in that the numbers do not have dots on either side and the lettertype is not the same. “Leo” isn’t mentioned here as  world copyright is attributed to “S.B. Armin 1986”.
1991: "white box edition 2"
French version copyright 1991 by R.Armin. The text an edited and expanded version of the original LWB, there are also quite a few differences in the images also. The French version also has slightly smaller cards then the original English one, but with a much better print quality.

The creator started his work linking the 22 majors to great works of art in the spring of 1979, (and a great season that is to let things grow organically isn't it?), using sections of these pieces of classical art, well known paintings by famous artists (for ex. Botticelli , Bosh, Rubens and many more), illuminations from manuscripts and colored engravings he created a nicely balanced yet eclectic deck that portrays the creative genius from past era's linked to the tarot archetypes. He also gave every card a motto fitting each card's personality and actions.. 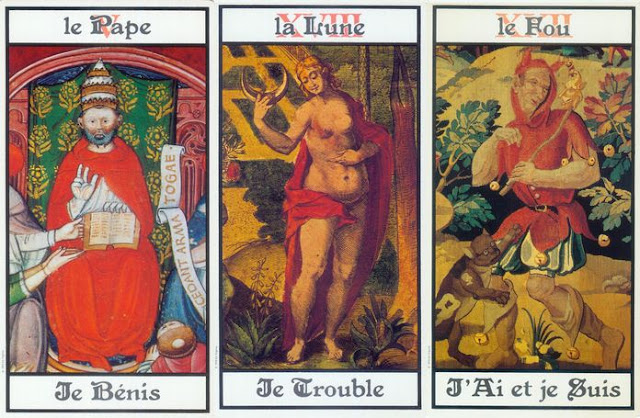 The deck subtitled Coloring Cards for the Game of the Scarab has 2 dates on in 1978 & 1982 and was published in New York  by the Arica Institute Press as a learning tool with color instructions for each detail put in the detachable borders.

Granted the title of this deck isn't the most original possible (there must been at leas a dozen decks by that name), but it becomes interesting especially from a collectors point of view when you know it's connected to  Frank K Jensen who published between 1989-1997 Manteia still one of the most important sources for decks published in that era, and also grand collector of decks.

This majors only deck was self-published in 1978 in a limited edition of only 200 decks with lots of blank space on the bottom part for students to add their notes and the possibility to color the deck. The images themselves where based upon Court de Gebelin and the notes in his work "Le Monde Primatif". 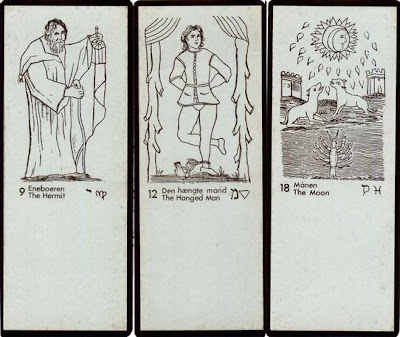 You can also see it at the Tarot Garden﻿
Posted by: Unknown At 12:32 No comments:

One of the subsections in my collection are dark decks and what could be more dark than a satanic deck  (from a conventional view - no offence meant to satanists) and this New-Zealand one has been on my wishlist for quite a while.

Low-budget printed with black ink on red paper it's the adaptation from the satanist point of view, like the renaming of the Emperor into The Anti-Christ but largely following the normal tarot structures. The deck, that is a majors only, resulted and reflects the path-working of Faustus Scorpius, and given form by Finnish artist Juha Vuorma and is accompanied by a 20 page booklet with information about the cards and for each a description of the 'astral journeys' from where the images came from and also  a  satanic spread . 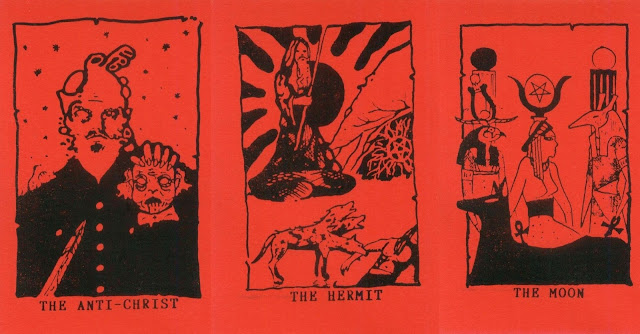 A long title for a deck I know very little of, I would even say nothing sadly, but it was at a nice price and i already had a big lot in my bag so how could I resist. The Papus "format" is one rarely used nowadays so every one I see draws my attention.

The deck itself is a black and white rendition in Spanish (judging from the printing quality and materials used I'd say South American rather than from Spain) of the Papus tarot drawn by Jean-Gabriel Gouliat from Papus’ 1909 work Le Tarot Divinatoire. 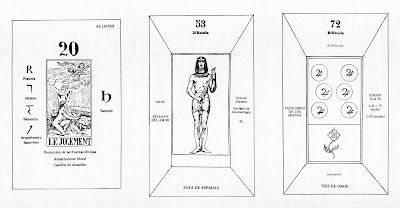 Yet another treasure from another era- created & printing during or just after WWII, this deck does show a certain agelessness, it could have been printed recently or over 100 years ago. It is a well balanced mix of age-old artistry and a style non limited or limited to fading fashions.

The majors are different than the WCS and Marseille decks and show an elegant yet powerful view of the archetypes, due to it's bi-tonal coloring namely deep reds on a yellow (originally white?) background. The minors seem to follow the design from Eudes Picard executed in a flowing & elegant design showing the craftsmanship of the artist.. 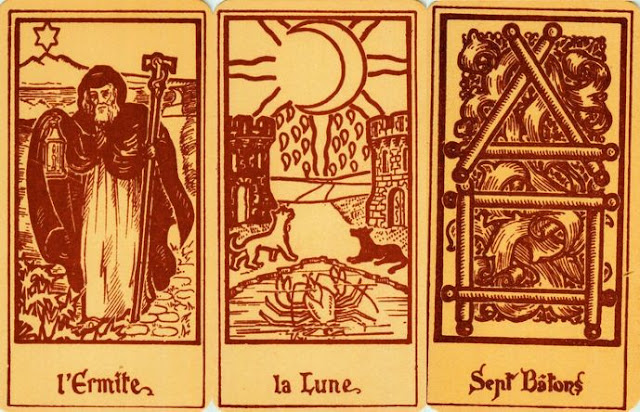 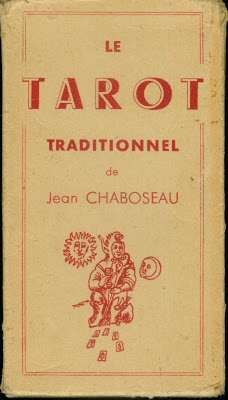 This is yet another piece I’ve obtained from the Hans Wesseling-Collection (see A.E. Thierens Tarot , Tarot de Marseille by Gilles and Anne Hipeau, Gli Arcani di Elisabetta (color) & Annabella Magie Noire Tarot).
Self published in 1982 this remarkable deck using only a minimal pallet of black, white and a something between deep red and brown. One of the peculiarities is that it has 2 numberings showing 2 possible sequences, there is the normal one (in roman numerals through all the majors and minors in Arabic all in traditional order – but with the suits being spades, hearts, clubs & diamonds), and then there is the numbering devised by the artist so you can lay out the cards in a panorama telling the story of Theseus and the Minotaur.
The Minotarot was published in a limited edition of 2000 and has achieved to gain a status as being very collectible and sought after so if you happen to stumble upon one (at a good price) snatch it up immediately because if you don’t there are lots who will! 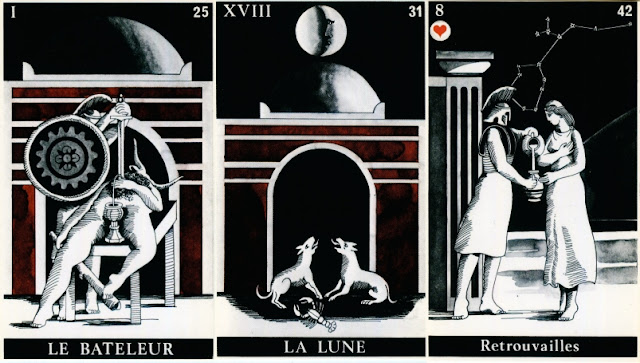 After an interruption of more than a week, due to me moving homes, I’m back online and back onto blogging, I hope to be a bit more regular and catch up some of the time I’ve lost lately. First I will continue to add the decks I’ve bought out of the Hans Wesseling-Collection, followed by new acquisitions (and there are quite a few)
So here I am again, take a seat and (I hope) enjoy my new postings!
Stefan.
Posted by: Unknown At 10:39 No comments: