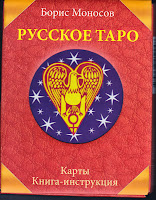 This charming and Russian deck not only in name but also in looks is one of the latest East European tarot’s to find a home in my collection and urging me to show it off to those visiting my blog.


As with (almost) all decks originating from that part of the world information about it is scarce to put it lightly, I suppose part of that fact can be traced back to the use of the Cyrillic alphabet, but still I did the very best I could and found some data about it.

The inspiration and system behind it is from Boris Monosov’s, a Russian mage and founder of the "school of magic Atlantis" the artist who drew the cards being Anastasia Nikolaeva.From what I gather the deck was printed in 1994 by Skyline Courier to be used for meditation and energy workings by the students of Monosov's mystery school.

In 2011 the deck was re-published by the Russian publisher Vector and sometime later became accessible to us here in the west, mainly thanks to eBay sellers from that part of the world.

So far for the history part of the deck, now the images themselves, the style and colors breathe a Russian atmosphere that is immediately recognizable, simple yet strong with colors that jump directly at you an effect that is made even more potent due to the use of large white sections within the images.

According to the Russian information I found the deck is WCS-based, yet when opening the box and looking at it, the first impression was more of a TdM based one, perhaps an hybridization of those mixed with Mr. Monosv's own vision??

One other thing I could gather and that may shed an interesting light upon this deck is the fact that many majors have been renamed to fit Monosov's system, some corresponding to the traditional meanings, others less.
The new names (translated by Google) being:
1)  Creator
2)  Cognition
3)  Matter
4)  Will
5)  Consciousness
6)  Inclination
7)  Achievement
8)  Force
9)  Spirituality
10) Fate
11) Law
12) Object
13) Destruction
14 Transformation
15) Dependence
16) Return
18) Development
19) Word
20) Update
21) Success
22) Illusion
Posted by: Unknown At 13:35