There are many animal themed decks out there both self published or by big companies, featuring all kinds of animals but decks with rabbits there are few (as a matter of fact this is only the 2nd one I found and bought).

The artist has worked 5 entire years on this deck  of anthropomorphic rabbits featured in images that are interesting renderings of the WCS-tarot but seen through rabbit eyes. The cards echo at some places classical works of art, general culture or ancient mythology  (doesn't that empress remind you of a certain Venus and that 3 of cups made me think of Alice in Wonderland...) there is even place for my favorite Egyptian deity.

The deck is for sale at miss  Clayman's Etsy shop in 2 versions an 78 cards one and one with 83 cards where the 5 extra cards are Thoth-tarot versions of The Emperor, The Star, Lust and Adjustment (Balance) and also an Happy Squirrel card. 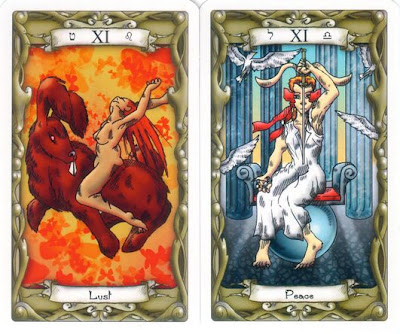 But wait there is more for those who doesn't get enough of this rabbit-o-rama there is the website wwww.twilightrabbit.com Fitting the theme the suits have been renamed to Clover (= Wands), Passions (= Cups), Carrots (= Swords)  and Stone (= Pentacles). The court cards became : Throne, Jack, Queen and King
Posted by: Unknown At 14:13